Part of our role is to help explain the impact of the outbreak in financial terms and keep you updated with our thinking from an investment planning standpoint. It can be difficult to write about financial matters without appearing insensitive but hope you understand our position and read the updates knowing that the tragic loss of life is in our thoughts.

The pandemic has forced Governments worldwide to balance the lives of their citizens against the economic pain that comes with limiting the movement of people, services and goods. Wealthier countries, like the UK, are understandably placing greater importance on life. As a consequence, the country, along with the global economy will fall into recession in 2020, with a substantial economic cost. However, the length and depth of the recession will depend on the measures taken to contain the virus and the Government’s action to alleviate the financial impact.

Our colleagues from Legal and General have provided the following graphic, modelling the recession and subsequent recovery based on three potential outcomes:- 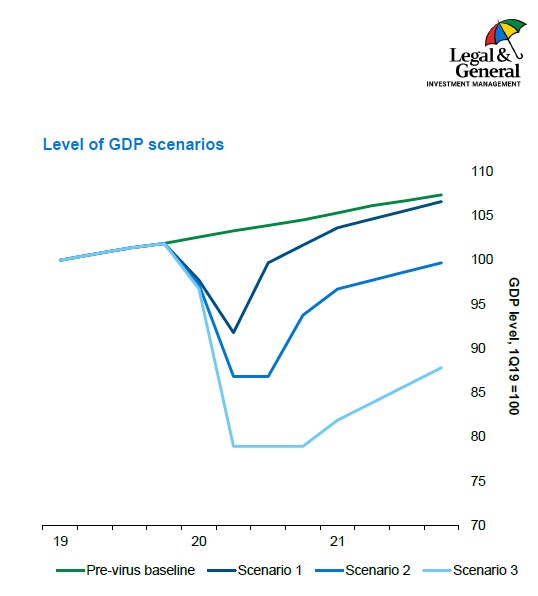 1. The first scenario assumes that the virus is contained rapidly and the Government step up to preserve capital. This is the ‘V’ shape recovery.

2. The second assumes a significant secondary surge in the virus, with on-off containment measures and employment remaining very high in 12 months. The ‘U’ shaped recovery.

3. Scenario 3, the ‘L’ shaped recovery, assumes that we suffer a continuous outbreak of the virus, with policymakers running out of ideas, leading to significant social, financial and political consequences.

The containment measures should be clear to everyone by now but how this plays out is very much unknown. Those that follow the news regularly will know that the UK originally planned to take a more measured approach. It involved reducing social contact, but not limiting our freedom. In the absence of a vaccine, the objective of the original guidance was to gradually allow 60 to 70% of the population to be infected, the vast majority of whom would suffer just mild to moderate symptoms. With enough people infected and subsequently immune, the spread of the virus would ultimately be stopped or at least slowed considerably. However, Imperial College London (ICL) raised concerns. You can review their research here. ICL concluded that pursuing ‘herd immunity’ without a vaccine would lead to a substantial number of deaths and overwhelm the health service. As a result, the Scientific Advisory Group for Emergencies (SAGE) advised the Government to change course. Anecdotally, while many European countries are now following more stringent measures, Sweden has continued to pursue the UK’s original approach.

The current ‘lockdown’ suppresses the virus. But it is feared that the outbreak is simply deferred. Lifting the measures entirely without a vaccine is likely to bring about a substantial secondary wave of infection. Instead, ICL suggest that flexibility will be required. When the initial surge is contained we should expect an on/off approach – lifting and then imposing different levels of social distancing throughout the outbreak, the severity of which will depend on the level of infection. The general consensus is that a vaccine will be available within 12-18 months, but there is hope that new technology in virus development could bring this forward. In the meantime, widespread testing is essential to identify those who are immune and those who are asymptomatic. If we are prepared to give up some privacy, the use of smartphone apps allowing efficient contact-tracing would also help reduce the risk of a significant second wave.

With this backdrop, it is impossible to predict the financial fallout however, a “Whatever It Takes” approach has been adopted by Central Banks and Governments globally. The importance of this phrase should not be understated. It refers to a speech given by Mario Draghi, the president of the European Central Bank, in July 2012. It was a watershed moment at the height of the Euro crisis. He promised almost unlimited financial assistance to members of the European Union, preventing the collapse of the Euro and immediately settling financial markets.

To combat the financial impact of the Coronavirus, the G20 (Group of 20) Governments have committed $5 trillion, which is nearly twice as much as required during the financial crisis. The money is raised through borrowing, but as before, borrowing from your own country’s bank is hardly difficult, especially at record low-interest rates. The money will be distributed differently from country to country, injecting liquidity into the economy (directly and indirectly to business and individuals) and protecting banks from bad debt. In other words, the collapse of the global economy has been prevented by almost unlimited fiscal and monetary support.

Those who caution against ‘money printing’ often reference the Weimar Republic in the early 1920s. Their loose monetary policy made the German currency practically worthless. However, this environment is very different. It is widely accepted that fiscal and monetary support is very unlikely to lead to inflation, at least not in the short term. Also, currencies are relative to each other, which is why the G20 is keen to co-ordinate efforts.

In summary, while there are many unknowns associated with the outbreak, the rhetoric from Governments and Centrals Banks should give investors confidence that as bad as the economic conditions may be, substantial financial support will continue for as long as required. This combined with strict containment measures, followed up with mass testing and better contact tracing technology, places us on a trajectory much closer to the first scenario than the third.

Amid a crisis, it is easy for our attention to be drawn to the negatives. There will be winners and losers of course, but we can take assurance from China, Singapore and South Korea that, while uncomfortable, the strategy we are following has worked well elsewhere.

Maintaining a broad spread of assets continues to be a sensible formula, but please get in touch if you wish to discuss this further.

Disclaimer
Issued by Sterling Financial Services Ltd, which is regulated and authorised by the Financial Conduct Authority. The contents of this update do not constitute advice and should not be taken as a recommendation to purchase or invest in any of the products mentioned. Before taking decisions, we suggest you seek advice from one of our qualified and authorised financial advisers. All figures and the information provided are correct at the time of writing. Past performance is not necessarily a guide to future returns, and the value of investments can fall as well as rise. You may get back less than you have invested. If you have any comments or suggestions on how to improve the monthly update or would like to be removed from our current email list, then please send an email to info@sterlingfs.co.uk or use the unsubscribe link below.