Many of our clients continue to hold savings on deposit to serve as both a contingency fund and to reflect their overall approach to investment risk. Although we recognise that interest rates have been poor for many years now, the security and accessibility offered from a conventional bank account form an essential pillar of a strong financial plan. The media have recently speculated that interest rates may move from very low to negative, suggesting that Banks and Building Societies will start charging savers to hold onto their cash. Our update this week explores this further.

The Bank of England’s Monetary Policy Committee (MPC) typically review interest rates eight times each year, but more frequently during periods of heightened uncertainty. During the early stages of the pandemic, the MPC opted to reduce the interest rate from 0.75% to 0.25%, then, as the economic impact became clearer, down to 0.10%. The current rate is the lowest ever recorded and a million miles away from the 17% endured during the Winter of 1979.

The MPC uses interest rates, along with other measures, to help manage the economy, with an overriding target to keep inflation at around 2% per annum. Broadly speaking, when interest rates are high, companies and individuals borrow less and use more of their income to service their debts. This is disinflationary, reducing the price of goods and services reflecting the lower demand. When interest rates are low, we typically have more disposable income and are willing to spend and borrow more, creating more demand and subsequently, inflation.

Our low interest rate environment was originally thought to be temporary, but the base interest rate has been below 1% for over ten years now. Inflation has broadly remained within its target range, leaving little scope to increase interest rates back towards their longer-term average of around 5%. Because of the longevity and stability of the low interest rate period, it has become normal to expect little return on our savings and to be able to borrow at a reduced cost too.

However, the chart below, from the Bank of England, demonstrates that before the pandemic, rates had started to increase, giving some hope that savers could finally start enjoying some better returns on their deposits. 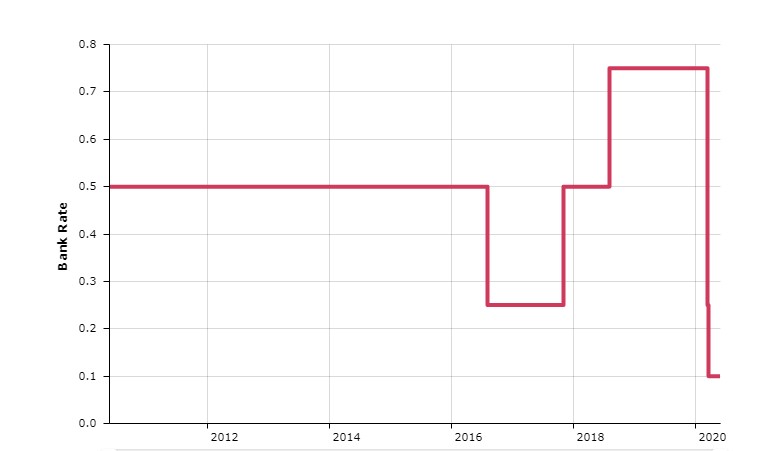 The pandemic has clearly set the economy back. The annual rate of inflation, recorded at just 0.80% in April, has fallen significantly below the Bank of England’s target. There is no further room to reduce interest rates conventionally. This has fueled speculation that interest rates will be moved into negative territory, to avoid a deflationary spiral. However, the fall in inflation can be explained by the restrictions imposed on our economy and our movement. Inflation has not necessarily fallen because we do not wish to spend, but because we have been unable to.

The chart below, from the Office for National Statistics, provides a breakdown of the inflation contributors over the past 2 years. The biggest detractors from the inflation rate in April, unsurprisingly, were Housing and Housing Services, Clothing/Footwear and Transport (oil). 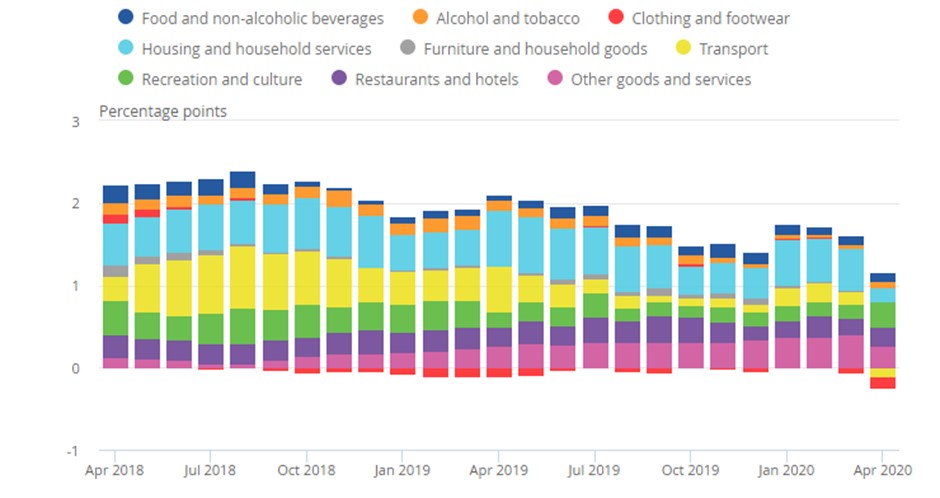 If introduced, the move to a negative interest rate environment would be a measure of absolute last resort. The objective being to encourage the banks to lend money, rather than maintaining any excess safely with the Bank of England. A bank is likely to be less risk-averse during difficult economic conditions if there is a cost to storing money with the central bank. Equally, borrowers, while unlikely to be paid to borrow, will be able to raise capital cost-effectively and with fewer restrictions.

However, the unintended consequences may well outweigh any benefit. Banks imposing negative interest rates on retail savers would lead to large scale withdrawals, with many people choosing to retain money in cash at home. This could compromise the financial stability of the banking sector. Indirectly, it can increase crime both through tax evasion and theft. It can also artificially increase the value of stock and property markets where investors are driven up the risk ladder seeking better returns on their capital.

We should also recognise that The Bank of England has a variety of ways of encouraging banks to lend, not least underwriting retail and business loans, effectively guaranteeing the return of the capital a bank or building society lends.

Savers should also bear in mind that negative interest rates at the Central Bank level will not necessarily lead to negative savings rates from the retail banking sector, but it may require them to shop around a little more to obtain some kind of gain. There is often a large difference between the official rate and that which can be obtained on the open market. For example, it is still possible to find 12-month deposit accounts offering interest of 1.25% or more, well over ten times the current base rate and, unusually, higher than inflation.

We can also look overseas for some reassurance too. The European Central Bank has operated a negative interest rate policy for 6 years, but savers in the Eurozone can still find positive returns. The same applies in Switzerland where the official rate is -0.75% and in Japan where the interest rate is -0.10%.

With all that said, the destiny of interest rate policy is firmly linked to how swiftly the pandemic is brought under control and how we feel about spending our money when things return to normal. We expect a period of higher unemployment and it will take some time for confidence to return.

In summary, negative rates are unlikely to be used until all other monetary and fiscal solutions have been exhausted, of which there are many. Even if negative rates are introduced, savers will most likely still benefit from positive interest, albeit at even lower terms than currently exist.

If you have any queries or require advice please contact your adviser.

Disclaimer Issued by Sterling Financial Services Ltd, which is regulated and authorised by the Financial Conduct Authority. The contents of this update do not constitute advice and should not be taken as a recommendation to purchase or invest in any of the products mentioned. Before taking decisions, we suggest you seek advice from one of our qualified and authorised financial advisers. All figures and the information provided are correct at the time of writing. Past performance is not necessarily a guide to future returns, and the value of investments can fall as well as rise. You may get back less than you have invested. If you have any comments or suggestions on how to improve the monthly update or would like to be removed from our current email list, then please send an email to info@sterlingfs.co.uk or use the unsubscribe link from the Mailchimp email.